Exotic salad
(This recipe is BY NUXIA) 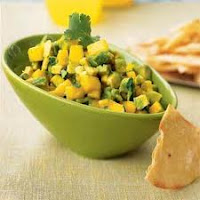 
Boil the corn and barley in salted water for 30 minutes. Wipe, spruzzaci over a few drops of lemon juice and olive oil and then allowed to cool. Peel onions and cut into quarters, put them in a baking dish. Mix the honey, olive oil, a pinch of salt and then condisci onions, stir well and cook in preheated oven at 150 ° C until they are soft and golden. Meanwhile, on a grid, you toast the cob and then cut away the grains in the vertical direction. Peel the avocado, then cut it into small pieces. Mix thoroughly and serve.
Recipe of the 2012/02/08


(This article is the property of the newspaper Corriere della Sera *) 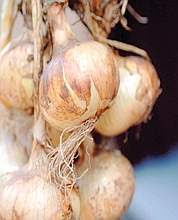 
PRODUCTION AREA: the province of Perugia.


PAIRING:
Good to be eaten as a salad with oil and salt, is also used in some preparations like soups or sour; goes with white wines with medium body and good aroma.
All local wines
Thanks to the particular climate regime and the composition of soils (sandy and wet) used for cultivation, the small town of Cannock near Foligno has an ancient tradition in the production of onions. Of the many varieties produced in the area, all tasty and refined, is reminiscent of the Golden Dawn, the Borettana and White Flat, but the greatest fame excels the Red Onion. Unlike other varieties, which are used for making pies or cooked in the oven and grilled red onion gives birth to the tasty soup, dish of local cuisine since 1600. This is a plant bulb round in shape, with clear and pulp, in contrast to other species, covered by a layer of purplish red color. Its flavor is slightly sweet, not at all tasty, and differs from that of the most common types. It is cultivated manually based on traditional techniques and harvest between July and September, after harvest the onions are tied in bunches and braids, and left to dry for about two weeks stretched on the ground. In the month of September at Cannock held a traditional festival of the onion.


Very versatile in the kitchen if consumed raw in salads, dressed with oil and salt, excellent sweet and sour, savory compound made from it. Among the dishes we must remember the Cipollato sausages, onion soup and onion stew.


* Note: This article is the property of the newspaper Corriere della Sera (cucina.corriere.it), is shown on this site, only to make known Italian products in the world. There is no correlation between this site / blog e and the above-mentioned.