CREAM OF POTATOES WITH HAM CHOUX

CREAM OF POTATOES WITH HAM CHOUX
(This recipe is By Nuxia ) 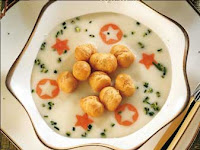 Preparation:
Prepare the choux (the day before): boil 100 g of water with the butter, a pinch of salt, then pour in the flour all at once and keep the mixture on the stove, stirring until make a sizzling sound as if friggesse and detaches from the pan, then transfer it into the bowl, let cool then work it with the whip hook, mix in eggs, one at a time. Pick it up finally in a pocket of fabric with mouthpiece and smooth deponetelo on a plate covered with waxed paper, forming as many balls as big as a hazelnut, di-allocated between them. Bake at 200 degrees for the plate 20 ', so check that the choux are dry. Prepare the filling: put the mixer on ham, Parmesan cheese, a dash of milk and a teaspoon of truffle paste, resulting in a creamy filling for about 30 choux. Cream of Potato: saute the sliced ​​shallots in a little olive oil and brown the sliced ​​potatoes, add a sprig of thyme, salt, pepper, and half a liter of broth, cover and simmer for about 30 ', then delete the thyme, and whisk in cream, bring it to a boil, tie it with the cream and serve garnished with choux and, if desired, stars of carrot.
Recipe of the 2012/02/22
alle maggio 22, 2012