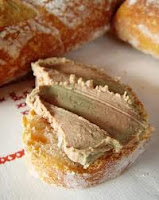 Ingredients500g of minced pork and veal equal parts350 g white meat (breast), turkey or chickenmeta 'cubes and half' milkshake150 g of lard bard, cut into strips (about 4 / 5 inches long (you can 'use of bacon lying)2 eggs2 dl creme fraiche (use the pen)150 g shallots (enough for me 60/70)2 cloves of garlic, germ removed (I can not put it)½ bunch of parsley (there will be about a dozen sprigs)1 tablespoon of "Four Spices10 grams of salt5 g of ground black peppera splash plenty of Porto25 cl of gelatin to the port (I bought a pack powder, ½ the preparation I have used more half)


1) Blend the parsley, garlic, shallots, and mix with ground veal and pork
2) add the Port3) the pepper, the four spices, pink salt (if you do not have normal salt)4) Whisk the goal 'of poultry meat and eggs the creme fraiche last 5) to add the goal 'of foie gras6) you get a nice mousse7) add this filling / mousse stuffing of veal and pork the other half 'of birds in small cubes and bacon cut into strips or bard (mix well using your hands if you have any problems using the gloves and put gietta)8) Place the bottom of the bowl, a first layer of stuffing, perdisponendo dimples for foie gras9) put stiscine, chunks of foie gras, cover, being careful to keep in place the foie gras, gently compressed, smooth with a spatula10) cover11) and put the dough around to seal the bowl (I did not want, I used the methodCookingBake in water bath and in a moderate oven 160 ° / 180 ° about 2 hours, 2 hours and a half second oil furnace.Just cooked, pour over the gelatin until bordo.Questo will do 'come to the surface and formed fat will protect' the bowl during storage and cooling (in a nutshell keeps soft). The temperature in the middle of the bowl varies between 75 / 80 ° C. You can 'ottimizzre cooking lowering the oven temperature during cooking to rimenere fork in this temperature.Note: I have cooked at 160 degrees for 1 hour and forty, I have the thermometer probe but without the cooking so 'is goodThe water bath is heated on the stove first, then put the bowl in a hot oven.Once the bowl has cooled, put it in the fridge and leave at least 12 hours
Recipe of the December 28