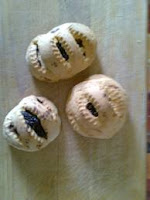 Easter Pie Calabria - Italy(This recipe is Nuxia)
These delicious cakes called "Pie" they immediately think that this is a sweet English. In reality it is typically a sweet spread in the Calabrian province of Vibo Valentia. The pious are to indicate the so-called "pious" ie, remind the devout women who prayed and shed tears at the tomb of Christ, for his death.Traditionally Pies were baked in a wood, from the local rural housewives. Today, however, are prepared in the oven in your kitchen.They have a filling composed of a mix of grapes and other ingredients that vary from country to country, but in any case, the meaning of this cake is to celebrate the arrival of Easter. In fact, its preparation begins on Good Friday, just to remember the passion of Christ. Traditionally, they are served to the table the night of Passover, as if he meant "Do not weep any more: Christ is Risen!"
Ingredients:For the dough:  1.5 kg of flour 0010 eggs250 g of butter400g of sugar2 packets of yeast40g of ammonia or sodium bicarbonate2 packets of vanilla powder1 cup whole milk
For the filling:500g dried raisins, washed and chopped400g of grape jelly250g of cooked wine or 150 ml. of strong coffee400g of walnuts shelled, cleaned and chopped300g of dark chocolate200g peeled and chopped almonds half teaspoon of cinnamon powder1 teaspoon of cloves
Procedure:The day before in a food processor chop raisins, dark chocolate, grape jam, and mulled wine or caffè.Lasciare rest for 8 hours. The next morning, add the remaining ingredients and mix.Prepare the dough: Heat milk, has become lukewarm. Dissolve ammonia in milk.In a planetary or a large bowl place all ingredients, even the lukewarm milk and knead vigorously with ammonia. Let the dough for ten minutes. Then spread a layer of about half a centimeter in height. With a ring mold or a glass or a cup of 7-8 cm diameter discs cut a lot of dough. On half of these add a few tablespoons of filling. On the remaining wheel with a zig-zag incisions to three stations on the dough, a couple of inches apart, from each other and 3 cm long. Important to let the dough whole and does not affect to the edges. These discs are placed on disks and are stuffed with close to dolce.Premere so well with your fingers, decorated on the edges of the dough disk filling. Now you have got a "Pia".Repeat this process until you finish the dough and the filling. Bake at 180 degrees for about 20 to 25 minutes. Remember to check the cooking of the pie that it may vary and should be regarded only guidance the cooking time.Recipe of the 2012/04/04