Penne pasta with zucchini and nuts 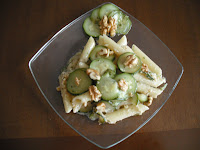 
In a saucepan, boil the pasta water eg. Cut the zucchini into rounds. Chop the onion. In a wok, heat the olive oil and add the zucchini and onion. Add the chopped parsley, salt and pepper to taste. Saute for a few minuto.Aggiungere a ladle of broth and continue cooking the zucchini with the lid closed. Bake for 10 minutes or until the zucchini will be cooked but firm. Meanwhile, toss the penne in the pan with boiling water and cook for time indicated on the package of dough. When the courgettes are cooked and the broth has evaporated, turn off the heat and remove the lid from wok. Chop the walnuts in a blender. Important: Do not have to be reduced polvere.Scolare pasta. Put the wok on the stove, along with zucchini and jump along with a ladle of broth. Turn off and add the chopped nuts. Stir and serve immediately.
Recipe of the 20/06/2012


Under the lens:
(This article is the property of the Corriere della Sera *)


PAIRING:
if dry, may be associated with a moderately sweet wine, a good body, even red.
All local wines
The presence of walnut trees for centuries characterized the hilly area of ​​Sorrento, and a time to bear fruit constituted one of the few foods they could rely on the farmers in mountain areas during the winter months. The valuable characteristics that distinguish the Walnut of Sorrento are the lack of oiliness, the flavor and easy to separate the husk from the kernel. Vary in size, but generally medium-small, comes with an oval or roundish, light brown shell and kernel, the flavor is delicate and the taste pleasantly bitter and slightly oily.


Good on its own, natural, walnut is widely used in many recipes, including sauces, as well as in confectionery which is an important ingredient.


* Note: This article is the property of the newspaper Corriere della Sera (cucina.corriere.it), is shown on this site, only to make known Italian products in the world. There is no correlation between this site / blog e and the above-mentioned.
alle giugno 25, 2012