Pita Bread - Middle East
(This recipe is By Nuxia)

The bread Pita bread is a Middle Eastern origin. Today is also widely available in the United States. You can find different weights small or large. Usually flavored with spices that make it exquisite. And 'circular and flat (hence the name) and is cut in half with a knife to form an inner pocket in the bread, to stuff with tasty ingredients of your choice and be eaten like a sandwich. The Pita bread once preparation must be eaten the same day. In fact, if the next day becomes very hard and loses its aromatic fragrance. It 'still a very versatile bread because once stale can be roasted in the oven, cut into pieces and be a great accompaniment to soups or used to accompany cocktal and appetizers. The Pita bread I'm going to offer is flavored with coriander and cumin. You can also try the version without spices, such as the one I propose in my photos, but I must admit that with the spices is much, much more delicious! 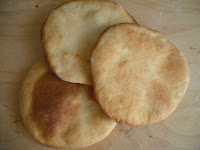 Crumble the yeast into a bowl and add water. Add 50 grams of flour, sugar and olive oil. Mix well. Leave to rest for 10 minutes, until the mixture begins to foam. In separate bowl mix flour, salt and cumin. Stir the mixture a little at a time into the mixture containing the yeast mixture and knead. Mix until the mixture is boiled. Continue to knead for a few minutes so that the dough becomes elastico.Coprire with a damp cloth and let rise in a warm place for an hour or until doubled in volume.
Separately, finely chop the cilantro. Beat the dough on the work table. Knead, adding to the mix the chopped coriander. Divide the dough into twelve pieces of equal weight. Since each piece into balls get round. Then smooth it out with a rolling pin in a subtle way so as to achieve the circles of 15 cm in diameter. Arrange the shapes in plastic wrap or aluminum foil, cover and let rise for an 'hour. Preheat oven to 240 ° -260 ° C (gas mark 9) and place inside two baking sheets for you to warmer. Transfer the circles of dough on baking sheets and spray them with cold water. Allow to cook in the oven for 8-10 minutes. Serve.
Recipe of 08/07/2013

The Curiosity of Nuxia:
In Italy, more precisely in Calabria said there is a pitta bread. It is very similar to this bread. Usually that before being put into the oven is stuffed with a number of ingredients, coated and sealed with another thin layer of dough, thus becoming "pitta china" - namely: pitta stuffed. In fact its origins come from their colonization of this land by the Arabs, in 'antiquity
alle luglio 15, 2013