Nuxia's recipes - "Back ... to the Future!"
Nuxia has some recipes created by her, at the beginning in the kitchen that have made a difference in her teenage years. All this is topped by a short personal story that introduces the recipe.
Today I will tell ....:

The "Mattutini" cookies were launched from White mill in the mid 90s. Years when in my teens raged in radio songs of Take That. All dressed up with their combat boots under the jeans, shirts, sweatshirts, and we used those large squares under Pullower of wool turtleneck. Not to mention the hair cuts that included the tufts high above the forehead, must be established by a lot of hairspray and gel. And above all, we remained literally glued to the TV will not miss an episode of Beverly Hills. Well, in those years could not start my morning beside my milk if there was a pack of Mattuttini side. So much so that my love for these cookies, took me to redo the kitchen, or rather to combine only disaster, followed by the screams of my mother in tow ... Maybe failing to surrender, which at that time was very difficult to redo without a recipe guide, cut out the box and kept it on my personal agenda of the recipes. The morning, but over time, they were no longer produced by the mill white, Take That disbanded their group and sent Beverly Hills, aired its last episode. Until something reported today these myths nineties, except mattuttini, which did surprise recently, finding quell'incarto still in the box in my old diary, I decided to redo them. This time, however, with the experience gained over the years in the kitchen, the recipe is successful. Today for all the nostalgic nineties and for those who want to discover these tasty biscuits, I present to you my brand new recipe. 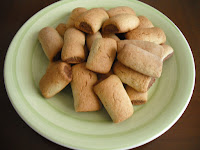 Mix all ingredients. Divide the dough into two equal parts. A part of dough add the cocoa. Let the dough rest in the refrigerator for 30 to 40 minutes. Making long strings is with the white body and with that dark chocolate.
The dough beads clear, I must have a thickness of about an inch in diameter, while the chocolate slightly smaller. Roll out thin the dough beads clear. Placing on top of the dough beads to cocoa and roll the dough clear on that cocoa, so that the dark paste is completely covered and it has closed within the dough clear. Cut the cylinders of 4.5 to 5 inches long. Place on a baking sheet with parchment paper and bake in a hot oven 180 degrees for 15 to 20 minutes. Once you have used up all the dough and bake the cookies are done, Put the cookies in the oven but still warm, close the lid and let cook until the oven has cooled. This is to dry the inside of the cocoa paste, which if not done drying in the oven will remain soft and cooked perfectly.
Recipe 26/09/2012