Traveling ... cuisine from around the world:  "Morocco - the land of spices and tajine"


The tagine is a Moroccan dish. It can be prepared with lamb, chicken, or beef. It takes its name from the typical pot where the meat is cooked, just Tajine. This crock pot is very special. Has a broad and flat shape, similar to a pan, while the cover, is elongated shape similar to a funnel. His cover as well as being aesthetically, has a very particular function in mind: When cooking the meat, allowing the aromas given off on the meat, without getting lost, in the ambient air, by becoming the final dish, very tasty and aromatic. Besides being a crock, and having to get to the meat be cooked very long, prevents any of the flesh burns due to heat. The recipe that I have presented is just one of many ways to prepare chicken tagine, which can be prepared, even as other parts of the chicken thighs, wings, etc.. I I preferred the breast without skin, why not release a lot of fat during cooking, but we can prepare it to suit your tastes and needs. If you do not have the proper tagine pot, do not despair: it goes very well with a steel pan bottom frequently, or use a crock pot that keeps the meat stick to the bottom. Important: remember, however, to stir the food occasionally. in the case of the pot tajine, the dish is not to be mixed. 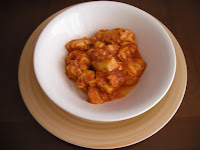 
Cut the chicken breast into cubes.
In a pan add oil and cumin seeds. Heat oil, fry without it (the hot oil will serve to give off the aroma of cumin seed). Turn off. Drain the oil from the seeds of cumin, a strainer with fine meshes. Collect the oil in a bowl and pour in a thick-bottomed pan or better still in the traditional tajine pot, if you have it
(The caraway seeds collected in the sieve should be discarded because it no longer needed). Heat oil and add the chopped onion, grated ginger, turmeric, and (possibly, also the chopped cilantro) and diced chicken. Brown just chicken. Add the tomato sauce, sugar, parsley, salt to taste. Mix. Add, 2 - glasses of water. Mix again. Insert a stick of cinnamon or a pinch of cinnamon powder. Close the pot with the lid and cook over medium-low for at least half an hour or until sauce is reduced completely. Important: mix from time to time, if you use a steel pan, the sauce because it may stick to the pan and burn. When the sauce is completely reduced, turn off the heat and eventually remove the cinnamon stick. Serve the dish hot or warm. Accompanied with bread, preferably Moroccan type.
Recipe of the 30/07/2012