Rolls Sudtirol By Nuxia
(This recipe was created by Nuxia) 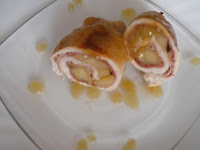 I created this dish for Fileni. The decision to use for this dish, apples and bacon I brought back to earth in the origin of these products. Although the ingredients also appears dry Marsala wine produced typical Sicilian, who, I prefer to soften the apples, you can substitute a sweet wine of the South Tyrol, such as Moscato Rosa.

Washed and peeled apples. Remove the cores inside the apple. Cut the apples into large cubes. Sprinkle with lemon juice. In a pan heat a drizzle of extra virgin olive oil, add apples, flavored with some spices: nutmeg, cloves, black pepper and a pinch of salt. Sprinkle with a bit of marsala dry, let it evaporate and close the pan with a lid. Cook for about 5 minutes over low heat. The apples should be cooked, but firm. Important: Do not throw the light sauce that was created during cooking. Will be used at a later time. Lightly beat the slices of turkey breast with salt and just. Insert above two slices of bacon so as to cover the surface of the meat. Put on a little drained from his apple sauce and rolled in on themselves slices of turkey, forming rolls. Close the two ends and the upper opening with toothpicks of wood so that the stuffing does not come out from the rolls during cooking. In a frying pan that goes in the oven, heat a drizzle of extra virgin olive ee put the rolls. Salt again. Cook quickly on all sides the rolls so as to seal the meat.Deglaze with white wine, and cook for about 5 to 8 minutes, add a little water if necessary during cooking. Heat oven to 220 ° with grill. Pass the frying pan into the oven, add a little water into the cooking liquid if necessary and leave until the rolls above will have formed a light crust will take about 2 -3 minutes. Remove from the oven. Remove the rolls from the pan. Combine the sauce with the rolls of cooking apples, add a little cornstarch. Dissolve the cornstarch in cooking liquid.Go to the pan on the stove and reduce the sauce until it becomes a light cream.Turn off the heat. Remove the toothpicks from roulades, and pour over the hot sauce. Serve.
Recipe of the 24/04/2012