Canapés the delights of mountain By Nuxia


These delicious canapés I've created about two years ago when a friend of mine, given my passion for cooking gave me the processed flour for bread, between which there was also one for the bread to 5 grains. I thought then that bread was so good to be a bread stuffing accompaniment. Open my pantry and was born with what these delicious canapés from the delights of the mountains, or the tasty appetizers, delicious to serve as an appetizer, but also perfect for a cocktail / party or to serve at a dinner / supper important. For this occasion, I recommend brushing the surface of the slice of bacon, with the meat jelly homemade for the occasion and finish with the cream to soft cheese clump together with some chives for decoration. In addition to becoming a dish of great visual impact, to offer these sofas, a strong taste, but at the same time refined. In the picture I show you the version of "fast" without these last two ingredients, ie, one to serve at a casual table. Here's the recipe: 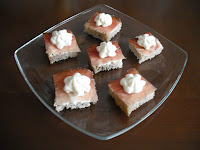 
Remove the crust from the slices of bread. Cut the slices of bread into squares of 3 to 3.5 cm per side. (Or use the molds shaped as desired.) Cut the slices of bacon the same size as the bread.
In a mixer add the soft cheese, honey, pepper and nutmeg. Operate the appliance and to transform ingredients into a smooth cream. Turn off. Spread the slices of bread with a thin layer to peel off with the cream, place the bacon slices are above it. transferred the remaining cream in a sac-à-poche star with a spout. If you prefer to brush the top with the bacon meat jelly liquid, ready for use, then garnish with a dollop of cream onto the center of the sofa. In order to taste decorated with some chives. Keep in refrigerator up to 5 to 10 minutes before serving.
Recipe of the 02/07/2012


Under the lens:
(This article is the property of the newspaper Corriere della Sera *)


PAIRING:
be eaten as the bread or used as an ingredient in soups and egg, goes well with white wines with good body and aromatics or red light and fruity.
All local wines
Speck Alto Adige IGP label Südtiroler is a packaged product only in the province of Bolzano, in particular in the Val Venosta, between Merano and the Swiss border. Although the term in German means "fat", for its production are used only in prime and thighs are boned and split in pieces, then trimmed by removing excess fat and rind. Each piece, or whisker, should present a uniform distribution of lean meat and fat. The baffe are then subjected to salting, flavored with garlic, juniper, black pepper and, after about three weeks, started in smoking. He hung in frames of iron in the fire fed with large shavings of maple and beech, un'affumicatura suffer cold, with temperatures not exceeding 20 ° C. Follows the maturation of at least 22 weeks. Once ready, the Speck Alto Adige has to weigh at least 3.7 kilograms. When buying, check that the rind is not in excess and the fat does not prevail over those thin, pinkish to reddish. Is firm to the touch, the taste is justly balanced between the saline component and smoking, and sweet with a hint of meat.


Try it with white or rye bread and butter, you can also combine sour cucumbers produced locally. Diced becomes an ingredient in soups barley. You can also replace the bacon in the preparation of fried eggs.


* Note: This article is the property of the newspaper Corriere della Sera (cucina.corriere.it), is shown on this site, only to make known Italian products in the world. There is no correlation between this site / blog e and the above-mentioned.