Turban of spaghetti with mock burrata


Turban of spaghetti with mock burrata 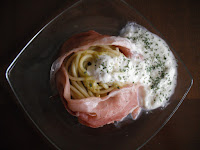 (This recipe was created by Nuxia)


In a saucepan bring water to boil for pasta.In a skillet saute the chopped onion with a little olive oil. Add the peas, a cup of water and cook for about ten. of minutes. Meanwhile cook the spaghetti. When cooked peas, blend with the mixer. Apart from the mixer to pass the mozzarella cut into cubes with milk and create a fake burrata. Drain pasta put a ladle of cooking water in a wok, along with piselli.Saltare medium heat for 1 minute. In a hot skillet without added fat fry slices of ham just to make them slightly crunchy. Roll with a fork cooking the pasta making four portions and place each slice on a serving plate. decorated each serving with two slices of ham slices around by placing the two in order to close them to the pasta like a turban. In a pan heat the cream cheese (fake burrata) slightly, and pour it on the plates garnish with chopped parsley. Serve immediately.
Recipe of the 13/06/2012


Under the lens:
(This article is excerpted from the Corriere della Sera, with additional notes by Nuxia)


PAIRING: They are consumed finely sliced, alone or with melon or figs. Combine with young red or white wines, often lively.All local winesham recall at the time of the Celts and Romans, when it recurred frequently in salt to preserve meat. It is a cured ham obtained from the thigh of heavy pigs. It typically presents with a pear shape, the weight can vary between 8 and 10 kilograms, but it can never be less than 7 kilograms. When sliced ​​Prosciutto di Parma pink color with white veins dates from fat. The scent is delicate and the taste is sweet and soft. Prosciutto di Modena is a deep red color, the flavor is mild, sweet taste, persistent.The ham is served cool, at cellar temperature, and requires seals cold boiled vegetables as a salad dressed with balsamic vinegar and oil, soncino or watercress. We do not recommend the use of pickles that prevaricherebbero the flavor of the ham. Is used in the kitchen not only in the rolls of meat, but also to wrap peeled shrimps. The ham bone soup was traditionally combined with beans or cooking for flavor.


PRODUCTION: After slaughter, the fresh ham is cooled in cold storage until it reaches a temperature around 0 ° C. Once trimmed of excess fat, the thigh is salt water, first with a massage and a quick cooling, and later with additional salting and subsequent massage. The thigh salt remains for at least 60 days at a temperature between 2 and 5 ° C. Then it is washed, is dried and undergoes a precuring, after which the curing starts proper. During this phase, through an operation called "smearing" or "grout", the free part of the ham rind is covered with a compound of lard (pork fat) or lard, salt, pepper and derivatives of cereals, order to protect it. The curing continues for about a year.


IN THE KITCHEN:
Can be used for the preparation of first and second courses. Great with bread. Also it becomes a delicate appetizer if served with slices of melon and balsamic vinegar from Modena.