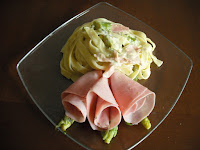 
Under the lens:
(This article from Nuxia)


This is a cooked pork ham, usually bone, lightly smoked, which is sold to the public hot and cut by hand.

Category: Fresh meat and their preparation


Territory concerned to the production: Province of Trieste.


Description of methods of processing, storage and aging:


We use pork legs heavy, fresh and not frozen. It provides for injecting into a vein of the brine supplemented with natural flavorings and subsequent hot smoking with wood chips of fir. Thereafter the ham, complete with bone, cooked in a boiler is still hot and delivered in the shops which provide for the general public. The product is sliced ​​manually as the consumer demands it. Materials, equipment used for the preparation and packaging and description of the work rooms, storage and ripening Given the problems associated with the hygienic processing of meat, the premises where the hams are processed and the equipment used conform to the legal regulation in force. Evidence supporting that the methods have been practiced consistently and according to traditional rules for a period not less than 25 years Prague ham comes from an old Austro-Hungarian tradition born in Prague exactly 150 years ago but was lost in the place of origin. In fact this type of product is unavailable in the Czech Republic whereas the butchers and grocers Trieste craftsmen have maintained an orderly and uniform rules and so tuttore is done by local industries.


Prague ham is part of traditional Easter menu Trieste and at this time is consumed with the pliers.
alle giugno 13, 2012