Sweet surprises in the stockings of the Epiphany

Sweet surprises in the stockings of the Epiphany
Small exquisite thoughts full of do-it-yourself fun and original, to make it truly magical awakening of the younger ones and celebrate the long-awaited return of the generous "old lady". 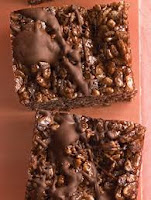 Preparation:
tempered chocolate: make it dissolve in water bath until the temperature reached 40 degrees, then transfer it on a marble surface and kneaded with a spatula, the mass flow rates at 28 °, then reheat in a double boiler even up to 32 °, thus obtaining thetempered chocolate which will incorporate the puffed rice. Pour the mixture onto a large sheet of baking paper and, again using the spatula, pick it up to form a block of about two fingers thick, let cool and thicken, then divide into regular blocks.
Recipe of the January 3, 2012 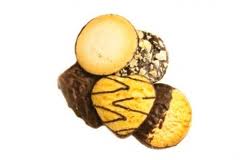 Biscuits TO THREE FLAVORS
(This recipe is by Nuxia)

Preparation:
mounted in a bowl the butter with the icing sugar and a pinch of salt; Incorporat then the egg white and flour sifted mounted with a sachet of vanilla and a pinch of cinnamon, resulting in a rather soft dough. Take small spoonfuls into mounds that lay well apart on a baking sheet covered with parchment paper (about 12 piles).Prepare 2 other plates the same: all the piles of dough will be 36. Guarnitene 12 with pieces of chocolate to the natural lasciatene 12 and 12 in each of the remaining piles of dough, stick a few pine nuts and sprinkle brown sugar. Bake the plates one by one (or all together if the oven allows), 200 ° 12 'approx. Remove from the oven, let cookies cool, and if you have no chance to eat them immediately, store in a tightly closed tin box. Recipe of the January 3, 2012 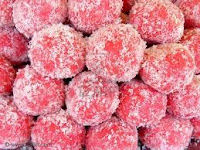 Marzipan Balls
(This recipe is by Nuxia)

Ingredients:icing sugar 350 g - 150 g blanched almonds - vanillin - egg white - yellow dye - 12 roasted hazelnuts - cocoa - lemon zest - and raw sugar - orange flower water - Maraschino
Preparation:
passed to the mixer almonds with a spoonful of sugar, giving it a fine flour mixture in a bowl with the icing sugar, a sachet of vanilla, a teaspoon of orange flower water, a tablespoon of Maraschino and one egg white , joined gradually by checking the consistency of marzipan to be rather flexible. Divide into 3 equal pieces, then: first to add a few drops of dye, the second fine grated lemon rind and leave the third plain.Make each piece into 12 balls of marzipan: 12 past the yellow album and the granulated sugar, the lemon-album and 12 in raw sugar, while remaining stuck in a hazelnut and coat in cocoa. Let dry 36 balls and if you like, wrap them in a transparent paper.
Recipe of the January 3, 2012 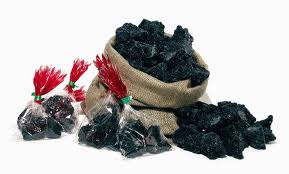 COAL BLACK AND WHITE
(This recipe is by Nuxia)

Preparation:
worked in a bowl the icing sugar with 2 tablespoons of egg white, 3 of alcohol, a few drops of lemon juice (glaze). Cook 500 g of sugar moistened with water, bringing it to 135 ° then Incorporat half of the glaze by mixing it quickly over high heat: the alcohol will evaporate into the mixture giving the appearance of porosity and coal pick it up 3 fingers in a block, in a mold greased with oil, then let it cool and thicken, then spezzatelo in blocks (white coal). Prepare the black cooking the remaining sugar (g 500) to 135 ° and incorporating the remaining frosting dyed with a dye cuccchiaino black.
Recipe of the January 3, 2012 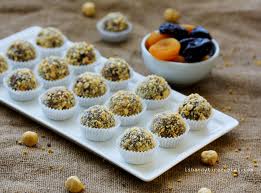 TRUFFLE OF DRIED FRUIT
(This recipe is by Nuxia)

Preparation:
passed briefly to the mixer all the fruit, dried and dehydrated, resulting in a compound rather coarsely chopped; pick it up in a bowl with a spoonful of liquor aromatizzatelo, then divide into 30 portions and form as many balls. Tempered chocolate, or warm it in a water bath at 40 °, working it up it to cool to a temperature of 28 °, then take it back to 32 ° and at this point, dip the balls of fruit, one at a time, making sure that if it covers completely (truffles). Let them dry on a wire rack placed covered with a sheet of baking paper, store in a cool and, if necessary, wrap in transparent paper.Recipe of the January 3, 2012 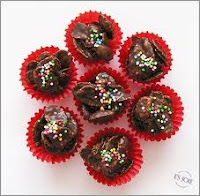 Preparation:
Tempered chocolate mix cereals and raisins, then divide the mixture into 18 portions which lay collected in small heaps on a baking sheet covered with parchment paper, let cool and thicken. Meanwhile, work in a bowl, 100 g of icing sugar, a teaspoon of egg white, a few drops of lemon juice and a spoonful of cocoa powder, resulting in a creamy mass (dark frosting) then pick it up in a croissant to decorate and the wire has come garnish the cakes with a dense network of lines.Complement them with some blade of corn flakes. Keep them in a cool place until ready to serve.Recipe of the January 3, 2012 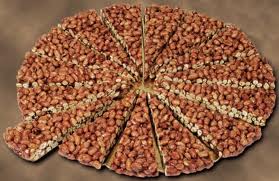 Preparation:
pick up the peanuts in a saucepan, the sugar and cook over medium heat, stirring constantly, until the mass becomes caramel-colored, then transfer it on an oiled marble, and with the help of 2 spatulas, knead until then it will start to cool and form a rectangular block of about 2 fingers thick, let cool and cut almost all bars.Recipe of the January 3, 2012 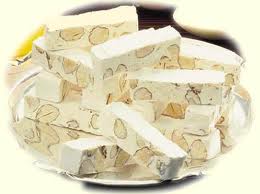 Preparation:
almonds in the oven heated to 100 ° and cook while sugar moistened with 30 g of water bringing A135 °; simultaneously in a large bowl, dipped in hot water bath, kept to a minimum on fire, fitted with a whisk the egg white with honey, a pinch of salt and add the cooked sugar, once it has reached 135 degrees, continue to mount the mixture a few more minutes then add the almonds and pistachios hot. At this point, turn up the flame under the water bath and, with a wooden spoon, continue stirring the ground almonds and sugar until almost become compact, similar to a ball, then remove it from the bath, aromatizzatela with vanillin, the peel 'orange and transfer it on a sheet of paper rice, spreading it about two inches thick, then cover with another sheet of paper rice. Let cool and nougat, before it is completely cold and often cut into rectangular bars, regular.
Recipe of the January 3, 2012

BISCUITS the "BEFANINI"(This recipe is Valentina N.)
biscuits that are made for the Epiphany
1kg of flour oo500g of sugar500 of butter5 eggs2 packets of baking powdera pinch of salt - grated lemon rind.mix everything as you would a pastry and let rest in refrigerator. The next day, roll out the dough and cut shapes. Cooking at 180 ° C for 10 min. After nearly cooked ... youcan decorate with icing and colored sprinkles, or can be left simple.Recipe of the January 4, 2012 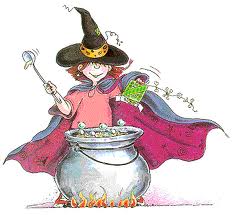